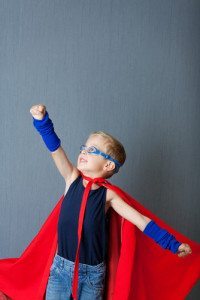 How to throw a Superhero Party. Superheroes for super-charged kids!

Little kids, and grown ups too, love super-heroes. There is something almost magical in super powers that can rescue the world from one disaster after the other. And of course it instills the most important lessons in life by telling them how to differentiate between the good and bad. A party, however, should be everything fun and a memorable experience that your little one is going to cherish forever.

With some planning and preparation, you too can throw an amazing superhero themed party and be a hero to your child.

One or all: Most children have one superhero that they are really fond of. When planning a party, you can have a general super-hero theme, or focus on just one hero and base the party around his powers, costume and even a guest appearance.

Start with the invites, since these are the best way to announce the theme of your party. Look up some ideas and templates online for DIY cards that you can get your child to help you with or if you want to, visit a party supply store to buy them. The ‘S’ shield goes well with the Super Man theme, webs are perfect for Spidey.

Costumes and capes: don’t just save their favorite superhero costume for Halloween, give it another outing at a party. While girls love dressing up, boys are not so enthusiastic about it. However they love the chance to get in their superhero costume and jump around practicing their super-powers.  You can have the young host dress up as the theme superhero and have his best friend dress as his sidekick. The Rest of the guests can choose characters from the movie/animation and dress accordingly.

If you want to make it simpler, you can just dress the host as the superhero and get costume capes, masks and other super-hero gear for the guests. You can also make them yourself, again looking up ideas online.

Setting up the party: While it is best to plan a party in a place that is large enough to accommodate a bunch of excited kids eager to practice their super-powers, an indoor setting gives you more creative space to set up the party according to theme. You can so it the simple way by decorating the party in the theme colors, with plates, cups and table cloth to match as well as a banner, or take it up a notch by setting up special stations, according to the theme.

A spiderman theme party should definitely have a face-painting station, to make sure every guest gets a spidey mask.

Ironman’s party would look really cool with a set up to mimic Tony Stark’s lab.

And of course the loot bags should be stuffed with superhero paraphernalia too.

Cake: what is a birthday party without a cake. If you feel confident in your baking and cake making skills, you can watch some online tutorials to boost your skills set in cake-carving and frosting. Or you can save yourself the hassle and order a custom cake from a professional bake shop. You can even go somewhat different and have birthday cupcakes, instead of one cake, so everyone can get a superhero insignia on their cake!

Activities: Party supply stores are a great place to look for super-hero theme games and activities. You can find Superman Frisbees, pin the ‘S’ on Superman posters, Ironman’s medallions, spiderman balloons and other things to customize traditional party games to your theme. You can also try doing it yourself if you are the arts and crafts type.

Special Appearances: The most magical moment, for the party’s host, of course is a special appearance by their favorite superhero. If you want to, you can get a costume and dress the part yourself. There are many children’s entertainment companies such as Amazing Fairytale Parties that have characters that will make your child’s party even more memorable. They also give out superhero goodies to the birthday boy, as a keepsake.

Whatever you do, plan everything to make it a specially super-fun day for your little super-hero!

The Amazing Fairytale Parties LLC Characters are NOT the copyrighted, licensed or trademarked ones you may know or be familiar with. Our characters are representations of beloved classic fairytales. We have NO affiliation with any company or group that may own the rights to similar characters or stories and apologize for any inconvenience this may cause you.